Today we visited to the Forbidden City. The Forbidden City is one of the most popular historical tourist attractions in the world. When we got there, there were thousands of people lined up to get in. We waited for ½ an hour in a line just to get passed security. Finally we got passed security and went to the entry gate and discovered we needed to have tickets to get passed this point. The people at the ticket gate told us the ticket booth was 100 m behind us, so we walked back to a small place where a few people were. We asked for tickets but the people said we were still in the wrong place and we needed to go another 100 m behind us! Finally we got to the ticket booth and waited in line for an hour to get our tickets. Once we got in it was worth it. It was huge! I learned a lot of things while I was there.

The Forbidden City consists of 9,999 rooms. 25 Emperors lived in the Forbidden City over 500 years. No one but the royal family and the court could enter the Forbidden City. In the city there are 1,000,000 artifacts. You can tell how important a building is by how many statues there are in it. The most important buildings are allowed to have no more than 10 statues. There is a 26 foot high wall behind the moat to protect the city. All of the buildings are for the emperors many wives. The emperor had to take care of the wives even after they were too old to “sleep with him”. There were huge vats, as big as me, which held water to put out the fires. (Most of the city was made of wood, and it often caught fi 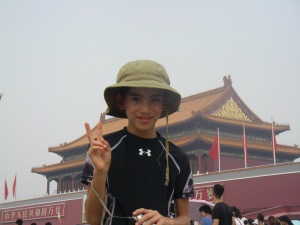 re.) They covered the vats with blankets in the winter to keep the water from freezing.

The main downside to visiting the city was that it was very repetitive; every section looked identical; it was hot and very crowded. Other than that it was great.