We arrived at the Great Wall. The view was really nice. The wall was very high up and I wondered how we were going to get up there. Were we going to have to climb when it was so hot? We first got the tickets for the slide. We learned that to get to the top you can take a ski lift, a cable car, or you can walk (if you have lots of energy! And lots of water!) We first took the ski lift up to the Great Wall. We took a few pictures and then went to the slide. The toboggan was basically two metal bars with a plastic seat on them. You have a lever that you push forward to go fast or pull back to stop. The slide was

a metal half pipe that curved back and forth from the top of the Great Wall down to the base.

I was too young to go by myself so I had to go with my mom on a double toboggan. At first we started going quite fast but there were about 6 people in front of us who kept stopping. This guy, who was several toboggans ahead would stop to film something, even though there were big signs telling you not to do that and the workers are yelling at everyone to keep going! I would recommend the toboggan ride but it would be more fun if you weren’t behind people who kept stopping!

After our toboggan ride we took the cable car to a higher section of the wall. You can walk for days and days on the wall. We walked a couple kilometres but it was very hot and humid. 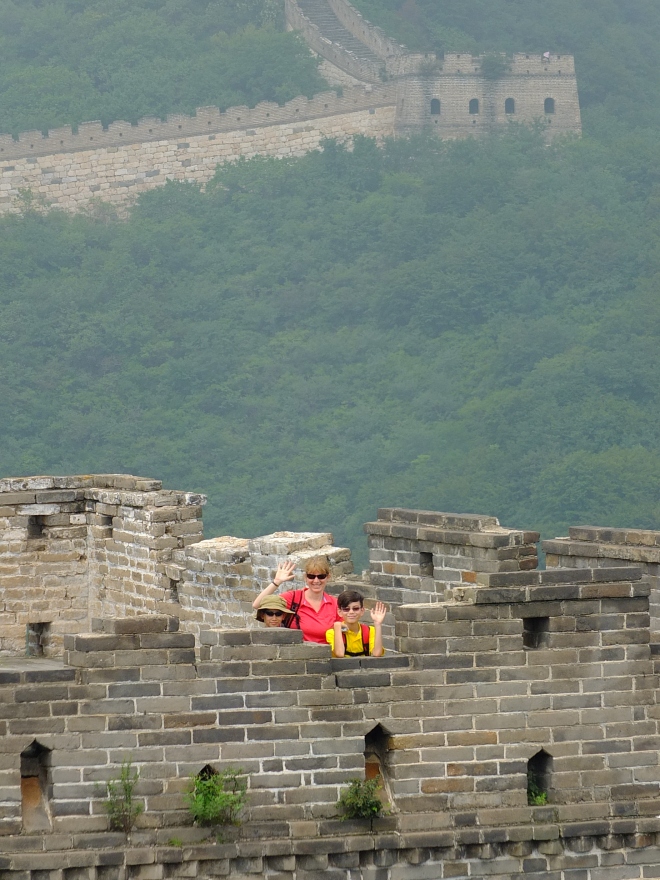 After walking on the wall we had lunch in a local restaurant. You sit at a table and they bring about 10 different dishes and put them on a big Lazy Susan in the middle of the table. We had to learn very quickly how to use chopsticks because that’s all you had! You put the rice in your little bowl and put the other food on your plate then you would take a bit of food and a bit of rice and eat them together. It was tasty!

6 thoughts on “China (Beijing): The Great Wall! – by Connor”