Our move to The Giggling Tree in Yangshuo has been good and we’ve gotten to do a few things locally that are closer than our last hostel.

We’ve been doing a lot of walking and biking, most recently to scale a site called Moon Hill. It’s called that because it used to be a cave but it has gradually eroded into a hole in the mountain that looks vaguely like the moon. It had rained torrentially the night before so the host of the hostel warned us that the bike trails would be muddy and hard to navigate. We, of course, decided to try it anyway and it wasn’t all that bad until we got to the place where we cross the river and we saw this: 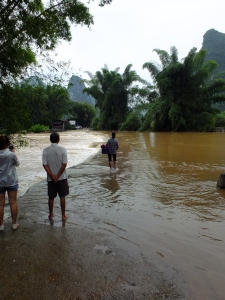 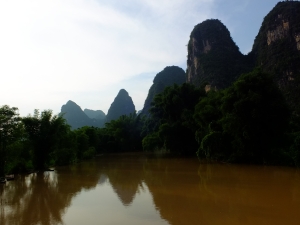 Yes, that’s the road where the river is supposed to go under but is flowing over top instead. Some local lady decided to brave the walk but we weren’t as confident.

Moon Hill was all steps but they were carved stone, under a canopy of trees so the sunlight didn’t actually dry them so they were slippery beyond belief! The hike was pretty arduous (we stopped to rest about 6 times) and Barb said it was good practice for our hike up to Machu Pichu when we get to Peru. Unfortunately, EVERYTHING is practice for Machu Pichu as far as I’m concerned. I must have gone thru about 2L of water just climbing up the silly thing! 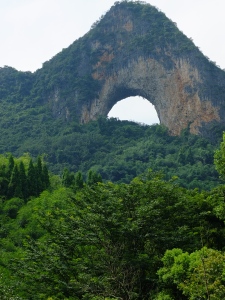 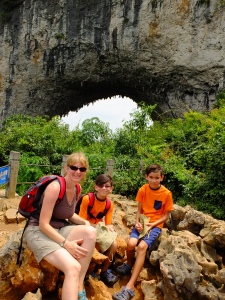 Coming down was almost as hard but seemed to work the calf muscles more than the quads on the way up. Doesn’t matter, my legs hurt for two days afterwards anyway.

We stopped at a local eatery. We couldn’t understand a thing on the menu but they had pictures so I pointed to stuff that looked somewhat familiar and indicated how many we wanted. In the end it turned out alright with us getting a chicken dish, an eggplant dish, a bean cake dish and a big bowl of rice for everyone to share.

From there we biked down the highway to the Gold Water Cave where we had a tour of the caves (over 5km of caves with new passages being discovered daily) but we obviously didn’t walk them all. Our guide was supposed to be English-speaking but it was limited so I think we got the shortened, less-detailed version of the tour. Part of the tour included a visit to the mud baths. Apparently it’s supposed to have minerals and be very therapeutic both for the skin and for your general health. I wasn’t so sure about that though. We changed into our swim suits and stepped into the mud bath pool which was pretty cold. It was squishy underneath the feet, smelled like sulphur (and worse), and the little floaty bits gave the overall impression of a sewer. However, when in Rome… 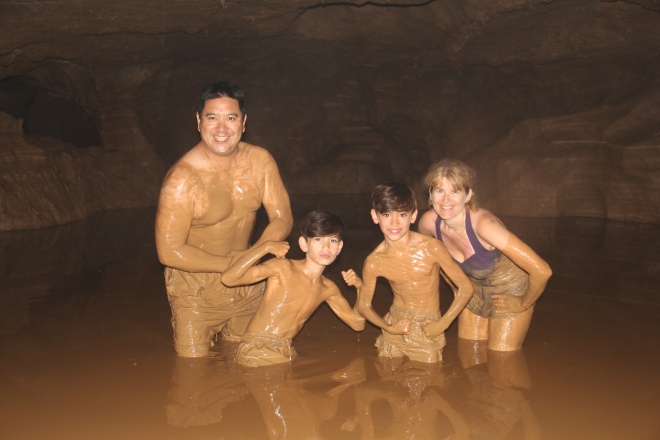 From the mud baths we rinsed off and followed the cave path to the hot springs. We tried to get a picture but all we got was white mist so I won’t include one here. Apparently the temperature got as warm as 40C in the warmest pool. The water was clear and still smelled of sulphur but much less so and was a nice contrast to the mud bath. The only downside were the masses of people in the pools with running, screaming children everywhere and the parents all ignoring them like that was the norm. Caleb and Connor were looking at them like “we would NEVER be allowed to act this way in Canada or anywhere for that matter”.

We left Yangshuo shortly after that to head to Guilin, a very clean (compared to Beijing) but touristy town who’s main industry is shuttling people by boat to — Yangshuo! We checked into This Old Place International Youth Hostel and walked around for a bit. We discovered that there is a pedestrian Night Market nearby that runs every evening from 1900-0200. In fact, the whole area where we are staying is well lit with multi-coloured lights and looks quite pretty. Here’s a couple of night shots at the market. 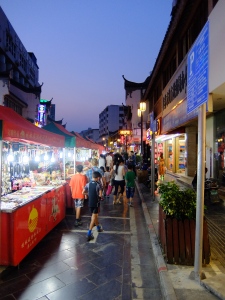 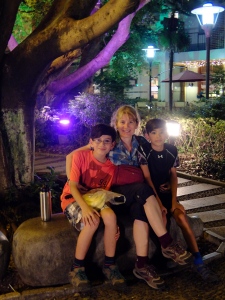 This particular hostel doesn’t have a guest kitchen so we’re pretty much eating out at restaurants all the time. We’ve managed to try a couple of local places, again not knowing anything but ordering blindly and hoping we hit upon something that we like. So far it’s been pretty successful. We even went to a place that specializes in roast goose so we had that one night and it was amazing!