Today we visited the COPE centre beside the Centre for Medical Rehabilitation. This is where people go who have had a bad experience with bombies or have had an accident and need artificial arms and legs. We watched a documentary called “Surviving the Peace” which was about the bombs lying all over Laos and the damage they cause. They are a huge safety hazard.

What I learned was that 2,000,000 tons of ammunition was dropped on Laos during the Vietnam War and it was the most heavily bombed country in the world. Even though Laos was neutral when the Vietnam War was going on, when pilots of the fighter bombs could not reach their targets (for various reasons such as weather, or they couldn’t find them) they would drop the bombs over Laos because it was not safe for them to land with their plane filled with ammunition.

The U.S. had signed an agreement that Laos was neutral and not part of the war, however, the US actually targeted Laos and bombed parts of the country because Laos was communist and they didn’t want communism to spread. This went directly against the treaty and should be considered a war crime.

After the bombing, the U.S. did ask if they could help to clean up the damage, however, Laos often refused because of the feeling that the U.S. was just seeing this as charity work. 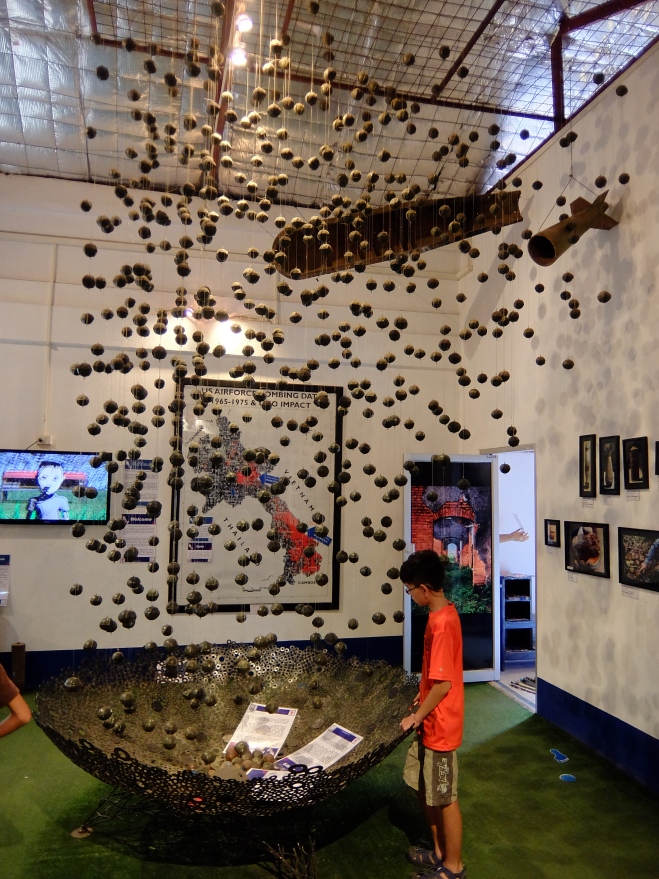 It is estimated that 10-30% of the bombs dropped did not explode, which left several million bombs in the ground, undetonated. These unexploded ordinances (or UXOs) are made of metal, which is worth a lot to the Lao people. Children buy cheap metal detectors and go out searching for scrap metal that they can get money for. They often come across bombs and when they pull them up they explode and they lose their lives. Other times, children come across bombies and use them as play toys – then they explode. People use the metal for a variety of things: as animal troughs, supports for their homes, dishes, farm tools, etc.

The UXOs are preventing the country from getting out of poverty because the farmers are unable to plow huge sections of land due to the bombies. Farmers live in fear every day that they will step on a bombie while they are working. As an example, one man was building a fire behind his house. He was unaware that there was a bombie under the ground and he’d walked in this area many times before; but on this day the fire reached the right temperature and the bombie exploded. He lost his sight and it damaged his hands and legs. He was in the hospital for a month and they thought he would die. Now his wife has to work in the field because he is unable to do so. This is so sad because they are risking their lives every day to go out and tend to the crops so that they can eat.

9 thoughts on “Laos (Vientiane): Learning about UXOs – by Caleb”