On the boat of catch a crab, we went fishing and I was very excited. Our guide told us to just take a fishing rod from the back of the boat and take the bait, which was shrimp. Of course there were lots of Korean and Chinese tourists! They just pushed their way to the back of the boat leaving Caleb and I behind.

After everyone got a rod and bait and started fishing, Caleb and I were still getting the rod and putting the bait on it. There was a little hook on the end of the rod and I had a lot of fun putting the stupid little thing on it! I gave up and asked my mom for some help. Then I felt very bad because my mom put it on easily and I couldn’t. 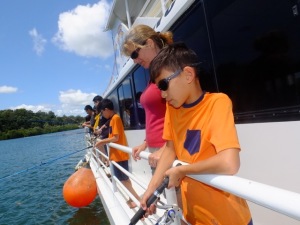 I put my line back in the water and waited. Then I realized that everyone else’s line was sinking and mine was not. I pointed it out to my mom and she said it would sink with the current. I waited for it to sink, but it never did. So I just had to deal with it. I waited for some fish to come along and bite the shrimp. While I was waiting, my mom told me to not catch a fish when she was gone, because she had to run to the washroom. Of course, I finally did! (And it was a big on too.) 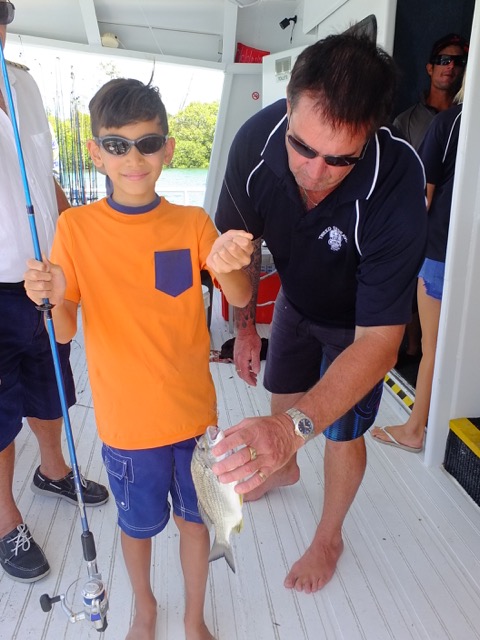 for his help, so now both of us are tugging on the fishing line. “FISH! FISH!” I yelled. My mom and dad rushed around the corner of the boat; my dad was holding his huge Camera. The captain helped Caleb and I hold the fish in place for a picture. After a few pictures had been taken, the captain took the fish off the hook and let it go. At first, Caleb thought it was dead. Then it vanished under the water.