Our last major activity in Australia was snorkeling in the Great Barrier Reef. We took a one and a half hour rocky boat to the reef, which none of us found very fun! When we arrived, we exited on to a massive floating platform where we would get our gear and later have our lunch. We ha the choice of either lycra suits or wet suits. We diced that it was better to be cold than to be stung by a jellyfish, especially a box jellyfish, thus we took the lycra suits. We got flippers and a snorkel along with

our lycra suits and were soon int he water, which was inhabited with many different coral.

I have a small quiz for you containing a few different questions about the reef. Question 1: How big do you think the reef is?

Question 2 (and final question): How many types of coral make up the Great Barrier Reef?

Let’s start with the hard coral – there are branching coral, plate coral, vase coral, sheet coral, boulder coral, cabbage coral, mushroom coral, slipper coral, and basket coral. There are all kinds of hard coral. With the branching coral, there are four kinds: staghorn, finger, needle, and knobby. The knobby coral looks a lot like a whole pile of stegosaurus plates all clumped together and sticking out of the sea floor. The needle coral looks, well, like a mess of needles under water. The finger coral is also pretty self explanatory. It looks like a lot of fingers sticking up and it covers a wide radius. Finally, the staghorn coral looks like moose antlers in the water. All four of these branching coral are fast growers, but they only grow to about a foot.

The soft coral all look similar. They all look like trees swaying in the wind. funny enough, only 7% of the reef is coral. I don’t know why. I just learned it and it’s right. Corals are really animals. They are the largest living organisms and the reef can be seen from space.

Now, there are lots of fish as well. I cannot tell you all about them because they are way too complex. I can tell you the names of a few of them though and you can Google them. There is the damselfish, the surgeonfish (or Dory from Finding Nemo), the rabbitfish, the maori wrasee, the parrotfish, the triggerfish, the butterflyfish, and the angelfish. 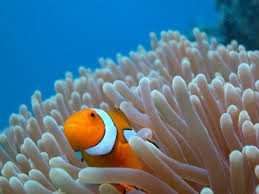 We certainly learned a lot about coral and fish at the reef and it was an amazing experience for our family.