After a couple of busy days in Cairo we took an overnight train south to Luxor. I had arranged with the same company who provided us with a tour guide to the pyramids, for a driver to the train station. Not only did they give us a driver but they also sent us with a young gentleman who stayed with us while we waited for our train, made sure we got on the correct train, and helped us with our bags. He even bought water and snacks for the boys! At first we thought this was very kind but unnecessary. However, as one train after another pulled onto the single platform in the dark, dreary train station, and the only announcements were in Arabic that we could not decipher, we were quite grateful!

The trains that pulled in were in quite a sad state of repair. Not many windows remained, the seats were tattered and worn, and everything was covered in several layers of dust and dirt. The boys looked at me with a worried expression. I too wondered what kind of condition our sleeper train would be in. We had to spend 10 ½ hours on this vehicle – hopefully sleeping! I kept telling myself, that these were all trains the locals were able to take. We were not “allowed” to purchase seats on these trains, apparently for the safety of the tourists. The only train tourists were able to ride was the sleeper train, which of course, was much more expensive. I hoped that this also implied the train was in slightly better condition but I certainly wasn’t going to hold my breath!

Finally, after waiting 2 hours, and about 45 minutes after its scheduled arrival time, a train pulled into the station and our ‘helper’ claimed that this was the one! He had assured us that we were standing on the correct end of the platform to board our berths but as the train started to slow he began running down the platform, our two duffles swerving and careening behind him! We, of course, fell in line behind him, trying to get a glimpse of the cabin numbers as we ran past. Fortunately, we’d spent the time with our new friend, while waiting for our train to arrive, practicing our Arabic numbers. The boys have much better memories than I and they were able to yell out the numbers as we whizzed by.

Finally, at the complete opposite end of the platform, we saw cabins 17 and 18. We clambered on with our bags, said goodbye to our new friend , and moved in toward our cabins – still with a couple minute to spare before the train started to pull out of the station. The train was definitely in better condition than the many earlier ones we had seen. It had windows and the seats in our little cabins were reasonably comfortable. We had to book two cabins because each one only had two seats that converted to beds. As it turned out, there was a door between our two rooms that we could open to visit.

Once settled into our rooms, they brought us each a tray with our dinner. It was rice, bread, bread, stew and bread. In the morning our breakfast was bread, bread, bread, and bread so we were happy for the additional stew at dinner! 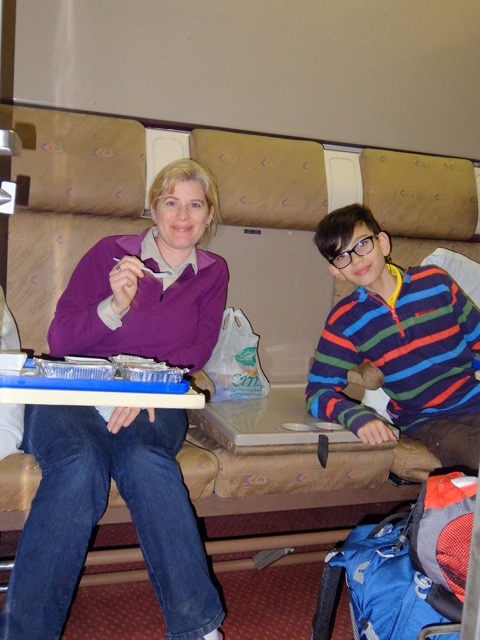 When we were ready to sleep we had to ask one of the workers to come and convert our seats to beds. The boys seemed to sleep not too badly. Clay and I, of course, woke up at every station we stopped at. We weren’t quite certain how we would know when to get off! Fortunately, with the “maps.me” app we could track the train and see when we were getting close to Luxor.  All in all, not a bad adventure!