Being married to Barb means that I get to hear about how her sister Kim goes on all these fabulous food tours all over the world. In fact, we just met up with Kim and her family in London, England not too long ago and Kim and her daughter Lana told me about the most amazing tastes they experienced from traditional fish & chips to British ales, bagels piled high with culinary goodness to salted caramel chocolates, and everything else in between I’m sure.

Those of you who know me also know that I like to eat. A lot. All the time. So why have I never been on a food tour like my sister-in-law? Well, I don’t really have an answer to that but when we arrived in Lima, Peru we decided to remedy this error in judgement.

A quick Google search showed several options for food tours but many of them were combined with a cooking class in which we thought the boys would not be interested. We DID find a tour called Food Walking Tour Peru that took you off the tourist-beaten path to small, family-run restaurants where the locals gather for meals. Plus, there was a walking component to go from spot to spot so eating good food meets cardio – what could be better?!?

We chose the Miraflores Flowers tour and met our guide, Kevin, just outside of the municipal building at the appointed time. They state on their website that they keep their groups small (10 people or less) to have that intimate “friends” feel. We waited for others to join our family of four for a few minutes. Finally, Kevin said, “Well, it looks like we’re on a private tour today with just us” and we set out on our tasting adventure.

Our first stop we had Parihuela, a rich and tasty soup made with six different kinds of seafood. 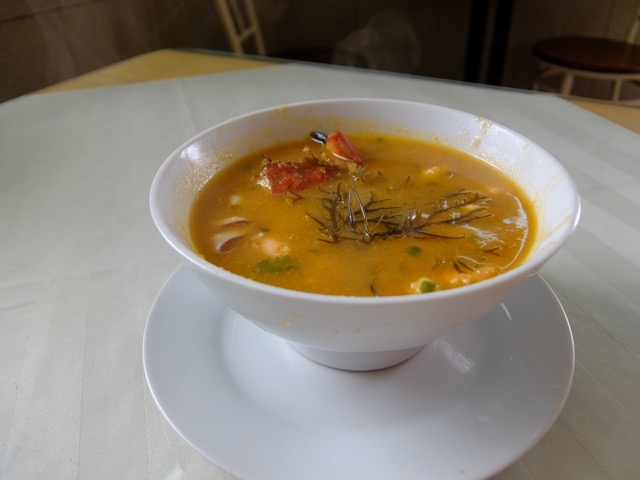 Barb and the boys had half a crab clinging to the side of their bowls by a pincer but as you can see above my crab had already started to drown. It made no difference because the soup was utterly fantastic! We didn’t know what all the ingredients were and apparently the seafood can vary from season to season but we were able to identify crab, calamares, some sort of white fish, and octopus. After a couple of spoonfuls Kevin told me that traditionally lime is squeezed onto the soup before eating so I did that and it tasted even better!

Our next stop featured a famous dish called Ceviche. 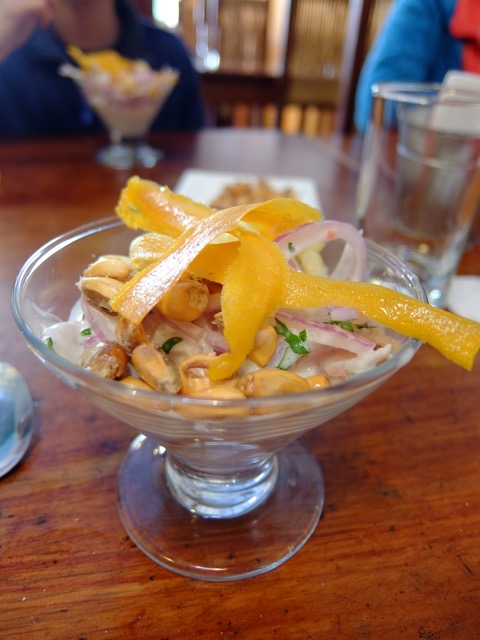 This consists of fresh, raw fish cured in lime juice and spiced with aji or chilis. Ours also had sliced red onions, toasted kernels of corn and crispy fried strips of sweet potato. I really enjoyed this dish as well as it had so many interesting flavours vying for the palate yet complimenting the limed fish. 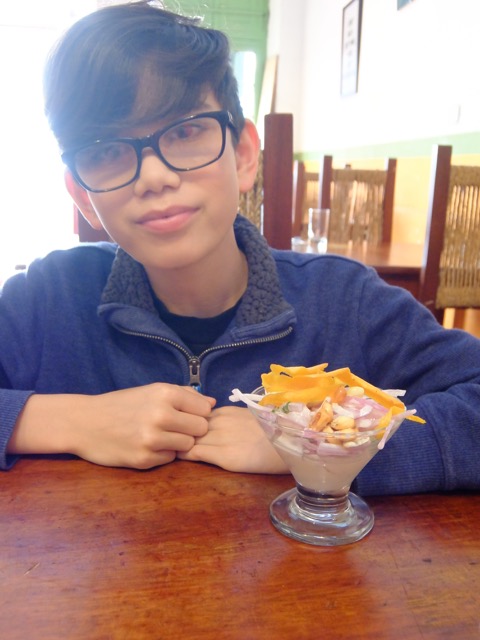 Next we wandered through a local market where Kevin started to break open some fruits that grow in the area for us to taste. Some we knew and some were new and some a little bit weird, like cherimoya which tasted like a cross between banana, pineapple, peach, and strawberry. 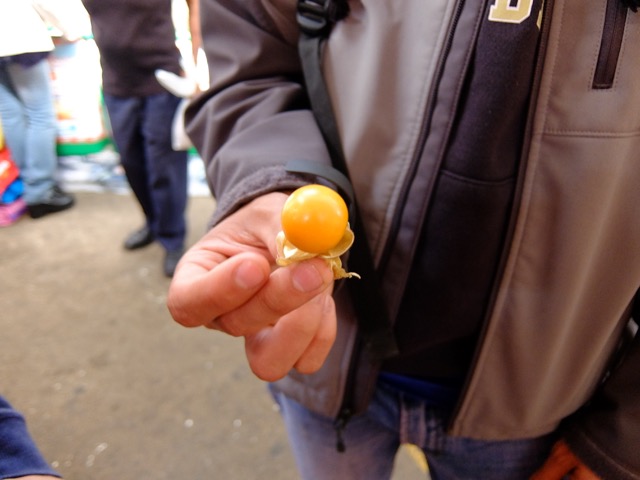 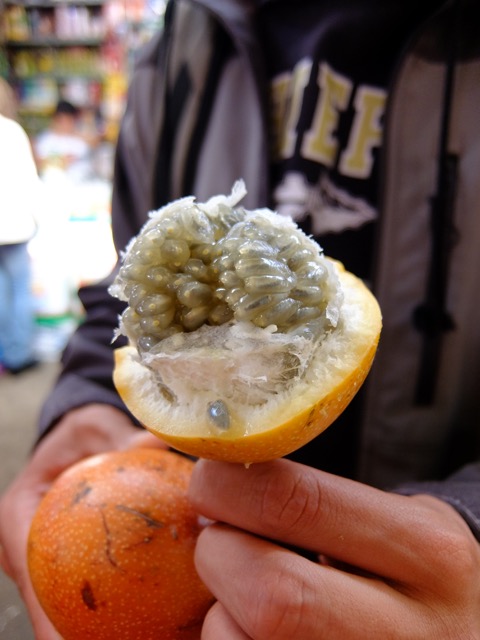 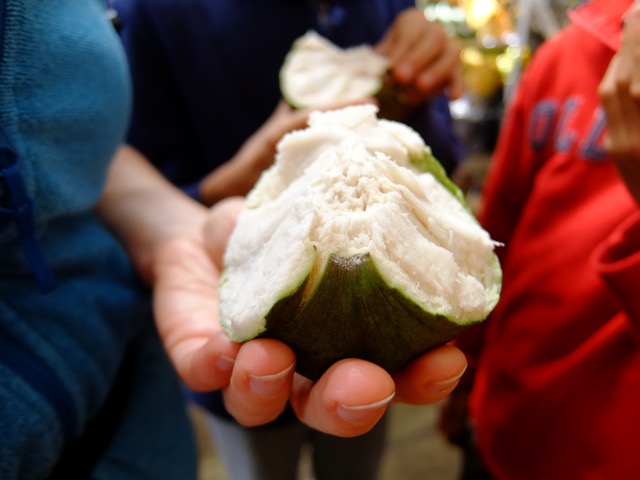 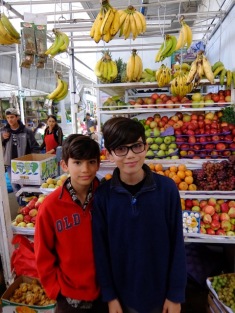 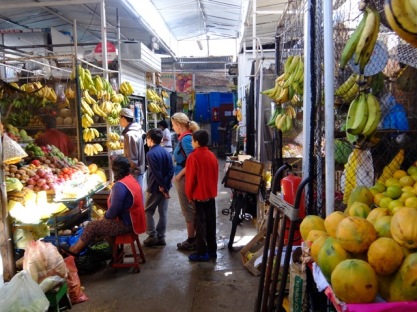 Farther along the market we stopped at a stall where they were making smoothies out of a fruit called lucuma. Its flavour is described as maple and sweet potato but Caleb and Connor said it smelled and tasted like brown sugar because it was so sweet. 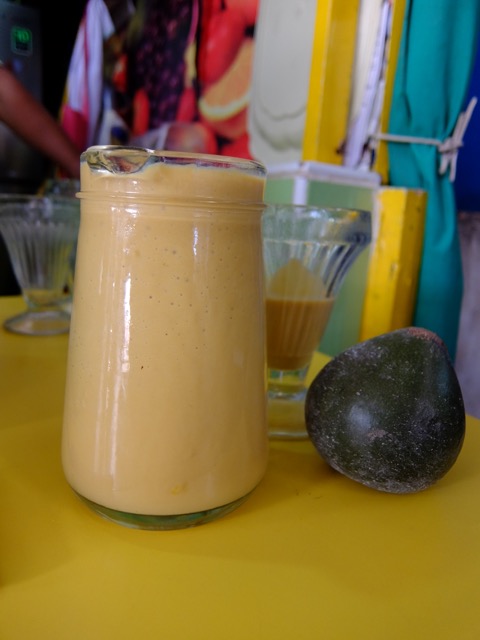 Then we wandered to the part of the market where they had meats and spices. Kevin got a small bag of potato chips and led us to a bright, colourful stall that had these bowls of different spiced sauces ranging from mild to “burn-your-face-off”. 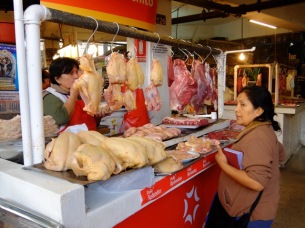 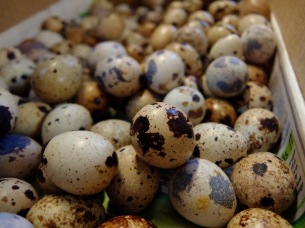 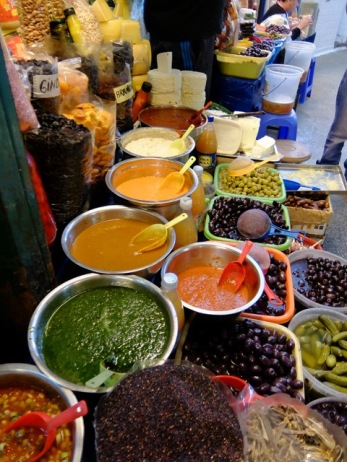 “You’d think the hottest sauce would be red but NOOOOOO, the green, which looked innocent enough, turned out to be the great deceiver – I still can’t feel my face”

From the market we headed to another Ma & Pa restaurant to have a “Comida Criolla” dish that turned out to be Seco de Cordero, which was a lamb stew with blended coriander and served with beans and rice. This dish was also very tasty but by this time we were getting so full we had to slow down to enjoy it and we knew the dessert portion was coming next. 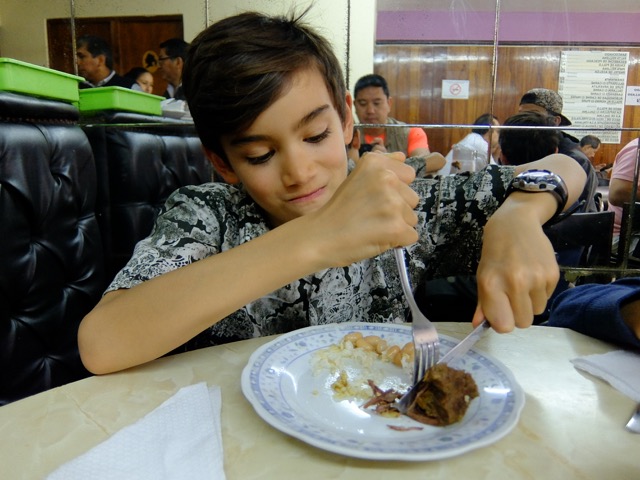 We were also served Chicha Morada, a drink made from purple corn, various fruits and spices. It had a sweet, light, fruity flavour and tasted best when chilled. 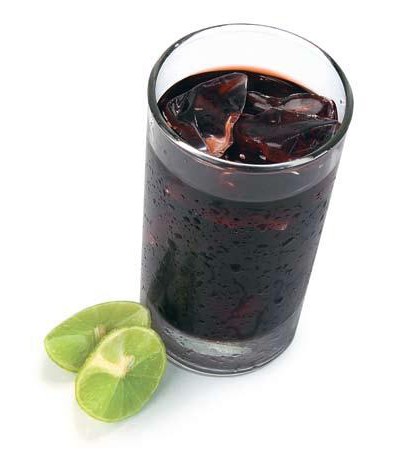 We sauntered to ChocoMuseo, the chocolate museum, and had a briefing about the process of how chocolate is made from the growing of the beans to the finished product from a very enthusiastic and friendly staff member. It was interesting and kept very short which suited us fine since we had already ground up cocoa beans and cooked chocolate at the Green School in Bali.

Part of this tour included tasting some of the liquors that were based on cocoa. I tried the coca flavour (yes, the same leaf that Coca-Cola started their drink), the coffee flavour, and the chilli flavour. All three were good and I would have liked to have tried a few of the others like cinnamon, mango, and ginger but six shots in six minutes is a little too steep for me! 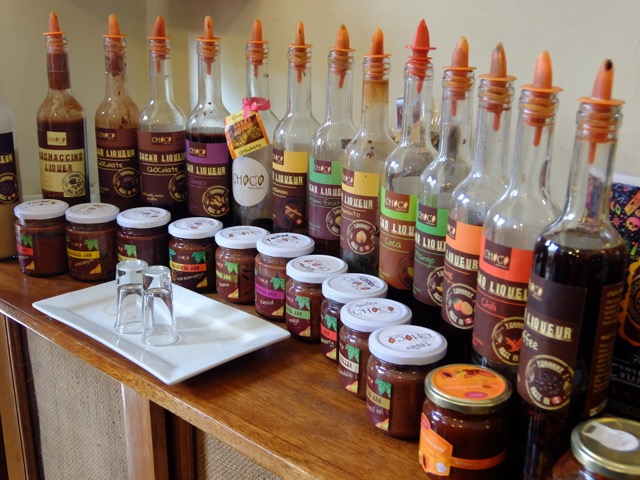 We finished our tour at the ChocoMuseo with a dessert choice of artisan gelato, pecan brownie topped with ice cream, volcano chocolate, or hot Mayan chocolate. Barb and I chose the brownie which seemed the smallest option and the boys both opted for the volcano chocolate. This consisted of a hard chocolate bowl filled with Oreo crumble, M&Ms, and brownie bits, topped with chocolate mousse, whipped cream and a maraschino cherry. Basically, sin on a plate. 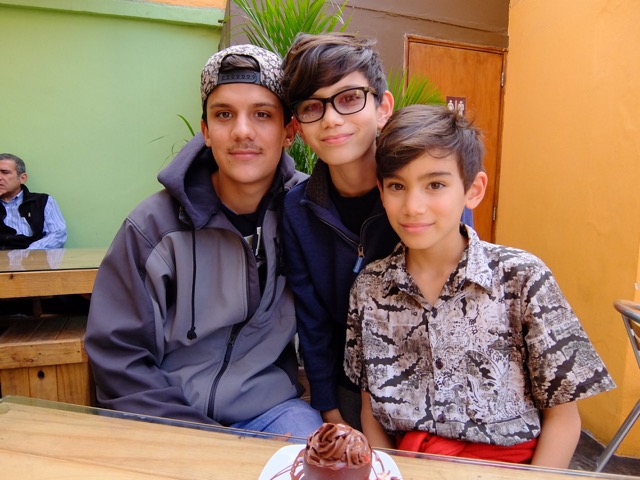 We thoroughly enjoyed our experience with Food Walking Tour Peru. Kevin was a great guide who shared of himself as he led us through the smaller streets of Lima. Their website said the tour would take about four hours but we were done in three, most likely because we were a small group of four instead of 10. If you’re in Lima and are not familiar with the local food, do yourself a favour and try one of these excursions. The value for our money was great and the food was excellent.

I learned that I would like to do more of these kinds of things and this experience has given me the motivation to catch up to Kim.

One thought on “Lima, Peru: A Taste of Peru– by Clay”