I was very excited about the Green Camp in Bali. In fact, it was the Green Camp around which I initially built our world trip itinerary. They only offer the camp on certain days of the year and I really wanted to make sure we were able to attend, so I booked the camp several months before our trip began.

I first came across the Green School a few years ago, when researching a variety of alternative schools. At that point they had not yet quite begun construction but they had the plans in place and a site picked out. Over the years I have watched (online) as the school has grown from its initial 40 students to over 400. Green School has won an award for being “The greenest school on earth”. The structures are built entirely from bamboo and sustainable resources, and students learn about eco-friendly practices throughout their day-to-day routines. The school is an international school, with its own curriculum, and is comprised of students from a variety of nations. Many families have made the decision to move to Bali so their children can attend the Green School, as opposed to the situation at other International Schools, where the families are posted there for work opportunities. 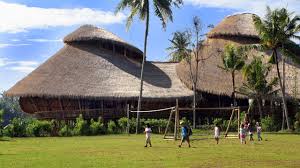 The Green Camp came about when families would visit Bali, hear about the school, and want a similar experience for their children; but they were unable to move there. The camp allows families to come and have a taste of the Green School experience but it runs as a separate entity from it – with its own buildings and accommodation, adjacent to the Green School.

Traffic in Bali is no better than in Jakarta, so it took us over an hour to get to the Green Camp from the Denpasar airport. We were already arriving late, due to the timing of our flight, and I was wishing that I’d planned for us to arrive the day before, as I hate showing up late for anything!

After traveling out into the country side, past several rice fields, we headed down a small laneway where there was a sign pointing to “Green School”. It was looking a little more rustic than I had expected, but as you know I don’t mind rustic!

We pulled into the rut-filled dirt parking lot beside a hand painted sign that read “Green Camp”. We were met by a camp guide who showed us to our “cabin”. It was constructed of bamboo with a high ceiling so the heat could escape, similar to the design of a yurt. There were 3 sets of bunk beds in the cabin and a bamboo shelf. We proceeded to unpack and then met our guide for our introduction to Green Camp. He explained the grounds and how to use the compost toilets. Having traveled for 3 months, with a variety of toilet styles, having to use one toilet for pee and another one for “the other” followed by a sprinkling of saw dust, did not phase us! 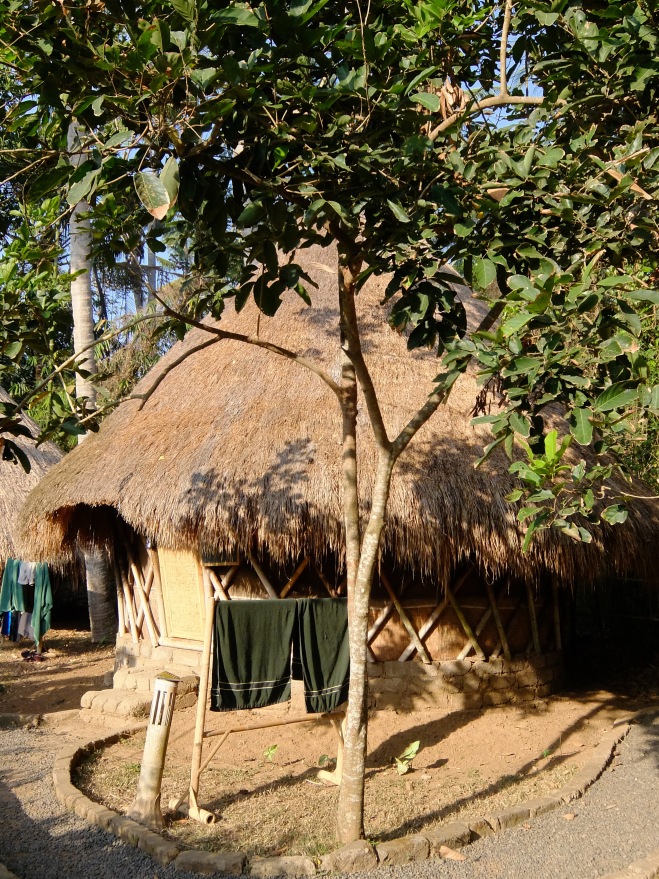 Just as our orientation talk came to an end the other campers returned from their hike and we had a chance to meet the families with whom we would be spending the weekend. There were 6 families in total, and 19 people. We were pleasantly surprised to find another family from Canada at the camp. Not only were they from Canada – but from Oakville as well! And the dad is a teacher doing a sabbatical year, the same as us! The two boys were each a year younger than ours. It was great to share stories and plans. Perhaps we’ll even cross paths again!

The first night concluded with a family campfire. The camp counselors played games with everyone and ended the campfire with marshmallow roasting. I was getting a good feeling about this camp!

Unfortunately, Clay had put out his back the day before we arrived at the camp and it was really starting to bother him, to the point that he could barely walk, and getting up and down was a chore. He made it down to the dining area for breakfast the next day but decided he’d better rest his back while we set out for the day’s activities.

Our first activity was to take a 30 minute bus ride to a local Balinese village. We were met at the village by one of the locals who took us to his home. He explained to us the design that homes in Bali follow. It was really interesting. When you walk through the front gates into the “home” you will see several buildings. He compared to the design of the home to the parts of the body. Each home has a temple, which is situated at the north-east (or north-west if north-east is not possible). The senior members of the family (e.g. grandparents) have a room/home along the north. The younger generation have a room/home on the west. There is a separate room or home for the kitchen. And each home has a main, central open room with a bed for celebrations and special occasions. Any pets, cows, pigs, etc are on the west side behind the houses. 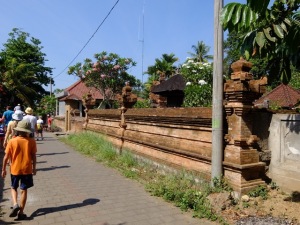 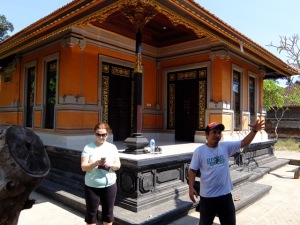 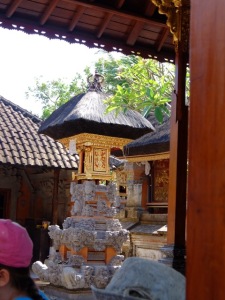 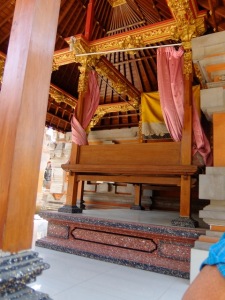 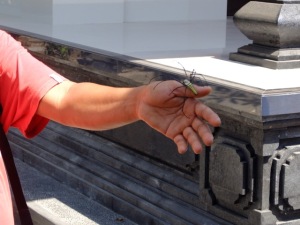 After the Balinese home visit, we walked past some incredibly large Banyan trees, and into some rice fields. Our guide explained the Balinese “subak” (irrigation) system – how the farmers get holy water to put on the rice fields and

how they cooperate to irrigate the fields. 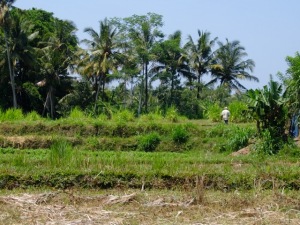 Next was the family egg drop competition. Each family was given an egg and 5 minutes to find natural materials off the ground and create something that would prevent the egg from breaking when thrown from a tree top. Connor spotted a Jack Fruit and we were able to dig out a section, put our egg in, and then fill the hole with leaves. Fortunately, when the jack fruit was thrown by our guide, from the top of the nearby tree, despite rolling for several feet into a ditch, it managed to survive unscathed! 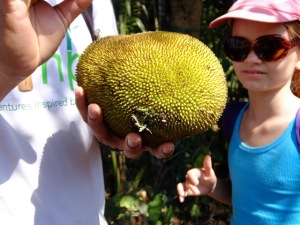 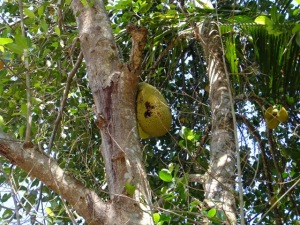 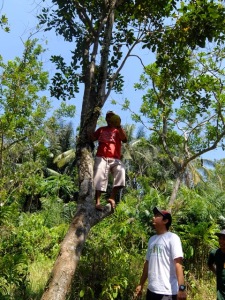 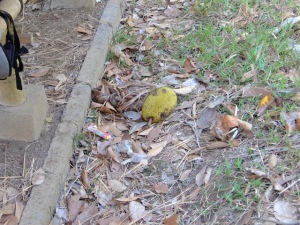 We continued on through another rice field and down an embankment, until we arrived at a river where we enjoyed a picnic lunch and a chance to body surf down the river in the current. 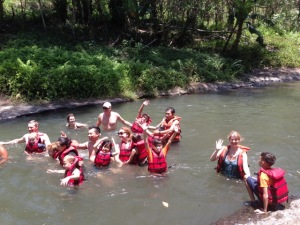 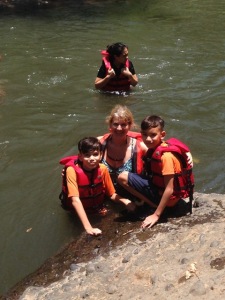 After lunch it was time to return to Green Camp where we had a 5 minute washroom break and met at the yoga studio for our introduction to “laughing yoga”. It was an excellent session and I can now say that I’ve found my favourite kind of yoga! Our instructor had the most infectious laugh and the boys thought it was hilarious! We learned how to laugh in a variety of ways: child laugh, young man laugh, old man laugh. And nicely intermingled between the laughter were a variety of yoga moves.

As soon as the yoga wrapped up, we had to head to the common area for natural dye making. Here the guides explained why and how natural dyes are made, and they set up stations so that the families could make their own dyes and use them to paint designs on cloth bags. 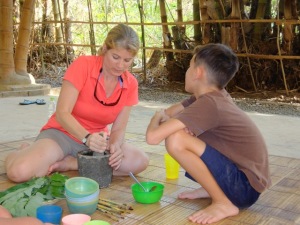 There was no time for a break – it was on to the Balinese martial art of Mepantigan, or mud wrestling. We returned to the yoga studio to learn the different moves that are used, and the corresponding calls. Then it was off to the mud wrestling pit! A large vat is filled with mud and everyone steps in. The leaders call out the directions and everyone follows along. Soon people are being flipped into the mud, here there and everywhere! Our boys decided to stick to the observation deck, along with Clay and I. We already spent a week getting the mud out of our bathing suits after our last mud bath experience! 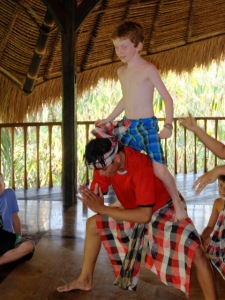 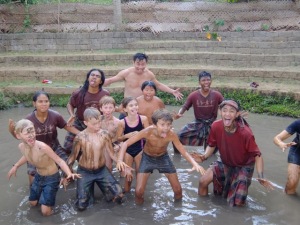 The day is still not over! For dinner, we  make our own pizzas and have them cooked in a wood fire often. 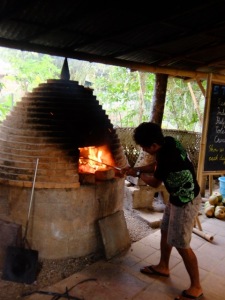 Next, it was time for the night safari. We all bring our flashlights and head out for a walk around the campus to see what interesting creatures we can find. Our guides point out a toad, which secretes a poisonous liquid when touched. They hold it up for us to see and a white liquid comes flying toward us. Apparently it won’t make us too sick but it will kill a snake if it eats the toad. We then find two pit vipers, and fortunately they stay in the tree at least a couple feet from our path! We also come across a couple of lizards and a gold backed snake. Not bad for our first night safari!

Day two is just as jam-packed. After breakfast we learn about the plants in the garden at the camp. All of the food that is served comes from the garden. We go on a scavenger hunt to find as many leaves as we can in the gardens and bring them back. Some are easy, such as chili pepper, and pineapple but we struggle to find cinnamon and Thai basil.

After leaf identification we have a lesson on compost making. Everyone is taken down to the cow barn where we mix up leaves and cow manure to make some compost. This is followed by a visit to the green house where some lettuce seedlings have been growing and we take them back up so the kids can plant them in the garden. 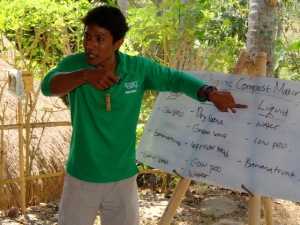 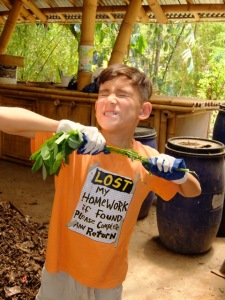 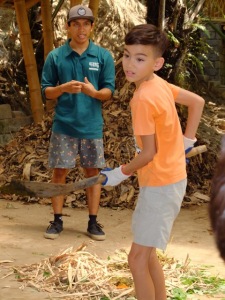 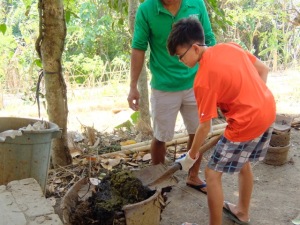 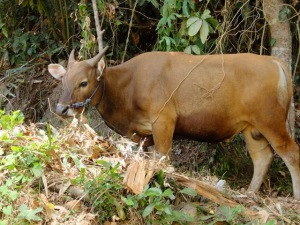 After our Balinese lunch on the ground, on banana leaves (called Megibung) we begin the family Egg Slide Challenge. Each family is given some bamboo stakes, 4 banana tree stalks, and some elastic and we must try to create the tallest slide to roll an egg down without breaking it. We were doing really well with our design until the banana stalks started to sag and the whole thing collapsed!

Next it was back to the kitchen to learn all about chocolate. We had a brief lesson on the history of chocolate and we each took part in making our own chocolate sauce. Some people had to roast the beans, others peeled them, at another station you had to crush them and sift them. Our efforts were rewarded with some delicious chocolate sauce that we poured over ice cream! 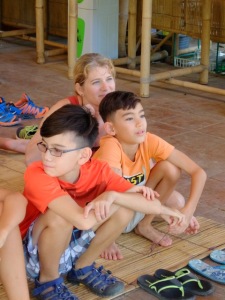 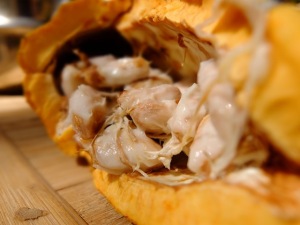 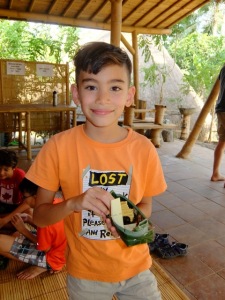 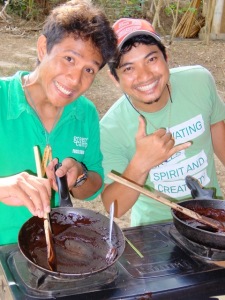 It was time to say goodbye to our new friends. What an incredible experience. We all learned so much and had an enjoyable time doing so. I would definitely recommend Green Camp – to those who enjoy a rustic experience that brings you closer to Mother Earth.