We arrived in Indonesia aboard an AirEgypt A330 Airbus with all of 12 other passengers. Each of us could have had our own section and multiple seats to ourselves if we wished. I wanted to run up and down the aisles but the flight attendants gave me this warning look of “I dare you to make trouble because I’ve really wanted to try those take-down moves that security taught me” so I thought better of it.

Once we collected our luggage and passed through customs we spotted Dad who greeted us with a big smile. It was nice to see family after two months of traveling! Mom joined us from another gate and we were introduced to several cousins who had come along as well. We all piled into their two vehicles and they dropped us off at the Grand Tropic Hotel and Suites, a place that would be much more convenient for us to congregate and from which to launch our daily excursions. Compared to some of the accommodations we had been living in, this seemed like we had been dropped into the lap of luxury. 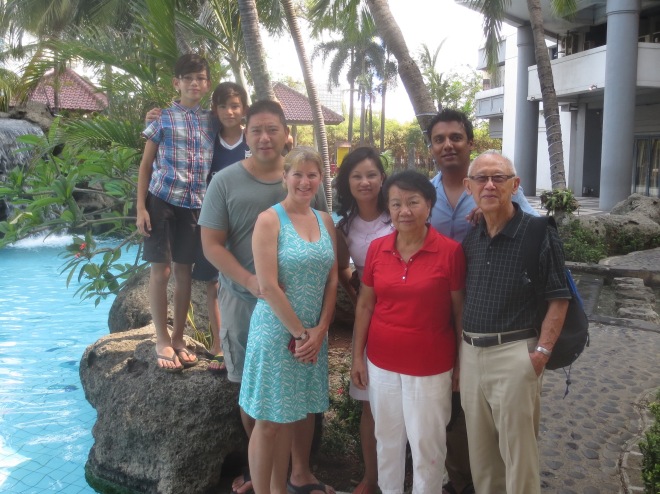 The next day it was our job to go back to the airport to pick up Jen and Feroz. We arrived at the airport a little later than their scheduled arrival time and they arrived a little earlier than that so we kind of did this Laurel & Hardy routine of “just missing each other”. Thanks to Jen’s resourcefulness she managed to contact me on my new Indo mobile number and we were soon on our way back to the suite. That evening we met with a good chunk of the Indo family at this fancy fish restaurant. We really don’t know what it was called but “fancy fish restaurant” means there was this massive 3D fish structure on the top of it advertising their main dish. And what a dish it was! They fried the fish and presented it in such a way that went beyond cooking and into the realm of artwork. We also had every manner of other seafood piled on the table and it was a sort of “tapas-style” where you helped yourself to a little bit of everything.

Our stay in Jakarta was short (4 days) and much of it was spent meeting up with the Indo side of the family for lunch or dinner or sometimes both and when they weren’t at work and finding interesting spots for the eight of us. One spot was called The Pandora Experience. Barb may have written earlier about us going to Escape Hunt in Bangkok where we were locked in a room and had to solve a mystery following various clues. The Pandora Experience was similar but much more intense because it had a Jack the Ripper theme to this particular episode. It also had multiple rooms on many levels that required us to climb, crawl, and duck in and out of in order to solve the complex riddles to escape. We’ve even thought about starting one up when we get back to Canada as the idea of devising clues and riddles has piqued the boys’ interest. Obviously I can’t show any pictures from the adventure as no cameras are allowed (not even mobile phones) so the adventure stays fresh and new for others but here’s a photo of us outside the facility which is basically a black, iron door. Yes, it looks sketchy but it’s really a bona fide business.