Our apartment was in the centre of Bangkok, on a small street, with a delicious outdoor curry restaurant across the street, our morning Pao stop around the corner (pao is a chinese bun stuffed with different meats), and a local market covering about ½ a city block adjacent to us. It was the perfect location, with the subway about 2 km walk away – not too bad in the heat! You didn’t have to travel far, however, to experience the whole different world of the malls of Bangkok! They seem to take their malls very seriously. There are local malls, where you find reasonably priced items in stalls, similar to a market and then there are, what we called, the “expat malls” which are very similar to the malls we have in Ontario. Here, the prices are similar to home, if not slightly more expensive. The malls, rather than stretching out, seem to soar up and up, some of them with more than 15 floors! And it seems that they try to group stores together by theme so you have the clothing floor, and then the camera shop floor, etc. After the “expat malls” we found there were even more upscale malls for what we could only assume were the wealthy. One mall was based on the theme of an airport and each floor was a different destination. You could travel to San Francisco, complete with the Golden Gate Bridge stretching across the centre! There was a London floor with shops inside a double decker bus. 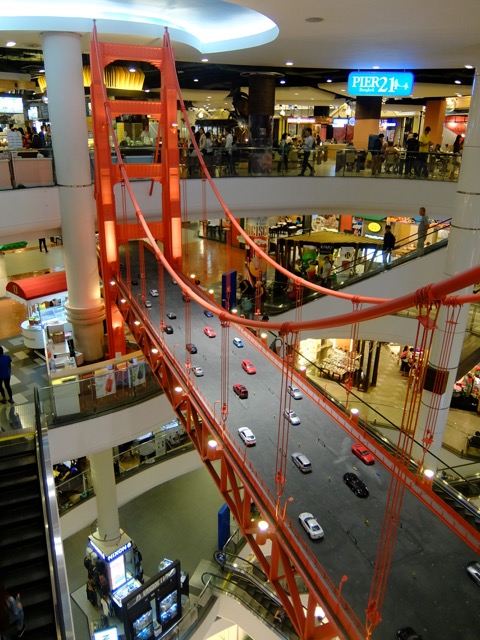 We, of course, were not interested in shopping – our two duffels are already full and we don’t plan to add another! Nor are the boys big shopping fans! However, we found that some of the attractions we were interested in were located inside these malls. One attraction we decided to give a try was “Escape Hunt”. You may have heard of escape games before, but we had never tried anything like it. The four of us were “locked” inside a room and given an hour to try to solve a crime. There were clues hidden around the room and often the clues led to a secret code that would help you to unlock another room. Once you reached the final room and figured out the solution to who committed the crime, you received a key to unlock the door so you could escape from the room. It was great fun! The boys were a little nervous at first because creepy music played the whole time, and a big clock was counting down on the wall, but once we got the hang of it, we were so busy solving puzzles, that we forgot to be scared! We made it out in 61 minutes (which officially meant we didn’t solve it in time – but they said it was close enough!). You can find Escape Hunt games in several countries, and there are other companies similar to it as well.

Another activity we decided to try while in Bangkok, was Kidzania. This is another company you can find in various countries, but there are none in Canada and we decided this was the best place to give it a try. Kidzania took up th

e whole floor of one of the malls and it was enormous. It is a city for kids, with all of the stores and buildings built to 2/3 of the regular size. The kids are given a cheque for $5 Kidzo when they enter the city. They must begin by cashing the cheque at the bank. Ad 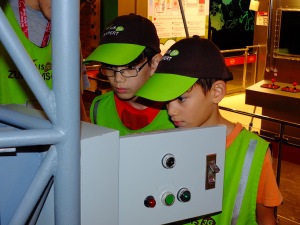 ults are not permitted to enter any of the buildings because the whole idea is that the kids learn how to do things independently. The boys were a bit hesitant at first, especially since it was all so foreign to them but they soon got on board! You could choose a few

activities for which you would spend your Kidzos, or you could

get a job and earn more Kidzos. The boys decided they

should find a job and collect as many Kidzos as possible. Their first job was at a Honda dealership. They had to design cars. They were given uniforms to wear, shown how to use the car design software, and 10 minutes later, they came out with their own car designs and 10 more Kidzos. Next they were off to become doctors. They had to remove someone’s liver, which they both found a little disgusting and they decided that perhaps becoming a doctor was not for them! We ended up spending the whole day at Kidzania, with the boys trying a variety of careers: interior designers, secret agents, cell phone repair workers, journalists, and much more. Caleb used a few Kidzos to scale a city wall and they combined their Kidzos at the end to purchase a light up ball. I loved the concept. What a great way to expose kids to a variety of careers.