The next stop on our world tour was Jakarta, Indonesia. Clay’s dad was born and grew up in Indonesia and we were very excited that he, Clay’s mom, Clay’s sister and her husband, would all be meeting us there. Clay’s dad has been back to Indonesia a few times and has visited his cousins and relatives who still live in Jakarta, but Clay hasn’t been there since he was 8. We planned to stay 4 full days, 5 nights in Jakarta. It wasn’t long, but when we had originally planned to come the relatives had said we could stay with them and we didn’t want to overstay our welcome.

As it turned out, four days was perfect! We were greeted at the airport by Clay’s parents. Our flight was delayed 3 hours, so it was already late by the time we arrived. The traffic in Jakarta is TERRIBLE so it took a while to get to our hotel from the airport. As it turned out, the relatives decided it would be best if we could all stay together (rather than a few of us at each of their homes) so they put us up at a beautiful hotel suite, complete with kitchen and pool. They had also arranged for us to have a driver and vehicle during the time we were there. Wow! We were spoiled!

When we pulled into our hotel at 10 p.m. we were greeted by a group of Indonesian relatives. Several of 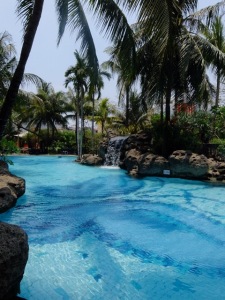 them spoke no English but they were incredibly kind and friendly. They had purchased us SIM cards for our phones, brought us groceries to put in our kitchen, arranged for us to have breakfast buffet at the hotel restaurant, and offered to do our laundry for us if we had any. Oh my goodness! We were a little overwhelmed! We weren’t sure whether we were coming across as grateful enough or even what was the culturally appropriate way to show our gratitude. The boys, on the other hand, were exhausted, and found it all a little too much – with their cousins so eager to learn about them while they were just wanting to sleep! I tucked them into bed in their room and hoped the relatives would understand. Finally, at close to midnight everyone left and we headed to bed.

The next day, Clay’s parents had a family event to attend and we were tasked with the job of going to the airport to get Clay’s sister and brother-in-law, since they were scheduled to arrive on a flight just after lunch. This was not too difficult since we had a driver and vehicle! Although the driver only spoke a little English we were used to communicating with lots of hand gestures!

I had been told that being fair skinned and blue eyed, I might stand out a little in Indonesia but I figured that since Jakarta is one of the most heavily populated cities in the world there must be a lot of fair blue eyed foreigners by now! I also knew that Indonesia was predominantly Muslim (which is why the boys came running into our room the first night at 4:30 a.m. wondering what the noise was – the call to prayers). What I didn’t realize, however, is that for some reason, even though I could walk around in the malls of Indonesia and blend in quite fine, the airport was quite a different story.

Clay and I arrived at the airport and since there were two different gates from which his sister could exit, we split up. Connor and I went to one side and he and Caleb went to the other. As I walked in to the waiting area, the 100 or so women squatting on the floor, waiting for family members to arrive, all turned to look at me. They were covered from head to toe in their Muslim attire. I, on the other hand, had not thought through my airport outfit very carefully and was wearing a skort (above the knee!!) and a tank top (without sleeves). Clearly this was not the norm! Children were pointing and people kept staring. A couple of people came up and asked if they could get their photo taken with Connor and I. I did my best to use Connor as camouflage – putting him in front of me to cover my bare knees but I don’t think it did much good! Of course, we couldn’t find Clay’s sister and brother and law for well over a very long hour!!!

The relatives had organized a family reunion to coincide with our visit to Jakarta. It was planned for Wednesday, so we were asked to keep that day open. After picking up Clay’s sister and husband at the airport though, Clay’s parents informed us that we had all been invited to dinner by a few of the cousins so they could meet us. So off we went to a local restaurant to meet “a few” cousins. When we arrived there were about 8 tables put together end to end and we were welcomed by 29 relatives! They ordered the food for all of us and we enjoyed an incredible meal of fish that had been fried into a fan shape (Gurami?), coconut juice, rice, sate, and much more. There was so much food!

During the course of our four days in Jakarta, we commented over and over again at just how kind the relatives were. They showed us what true hospitality is. Each day, even after they had worked all day, they would invite us out for dinner. They brought us groceries, arranged for us to see the sights, and checked in with us to see if there was anything else we needed. We got to meet the entire extended family at the family reunion (about 100 people) and were treated as though we were the royal family on tour! 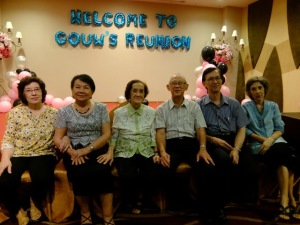 By the end of four days we, and the boys especially, were exhausted by the late nights and busy days. It was time to head to Bali for the Green School Family Camp experience.

One thought on “Jakarta, Indonesia: Family Reunion! – by Barb”