Half way through our 3-hour road trip to Queensland, we came across a plantation called the Big Banana (they’re a banana harvesting attraction if you couldn’t have guessed). Alongside the plantation, there was a mountain toboggan (mountain coaster), a 36 hole mini golf course, a waterpark (the largest waterpark between Sydney and Queensland), a theater with a self guided tour, a café, a candy making shop, ice skating (indoors of course or else it might not be ice skating any more), and laser tag. We got a package that included 2 toboggan rides, and 1 theater pass.

We decided to begin with the theatre experience. You traveled through 3 different theatres as part of this self guided tour. We began in theatre one which had a dome like screen that wrapped around you. Behind the translucent screen were large wax figures, such as an elephant and farmers. While the movie played the lights focused on these figures at the appropriate times, to make the move 3D.

We learned about the history of banana farming and how it came to Australia. After about 15 minutes in the first theatre, we moved into the second, in which there was a glass case with a diorama of a small town. When the movie began 2 digital people appeared in the town and began chatting to us about bananas and their importance to mankind.

From here we moved into the banana plantation that was rife with banana plants. We even got to eat some!

We saw how the banana plants were harvested and how they grow up the hills. 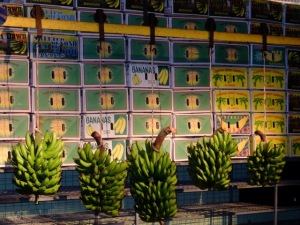 Finally, we entered the warehouse and had a chance to try lifting a banana bunch and saw how the bananas were packaged to take to the supermarket. 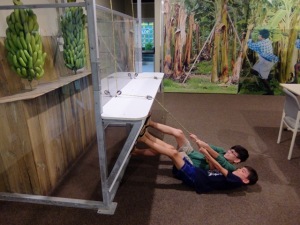 Our tour dumped us out into the banana café where there were bananas on a stick (covered in chocolate), banana ice cream, banana crepes and lots of other goodies!

After a light lunch we headed over to try the mountain coaster. This was similar to one we had done on the Great Wall of China. This one was shorter but still a fun ride! 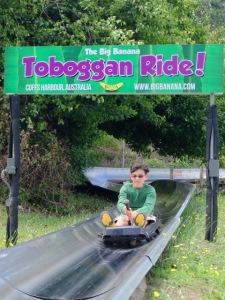 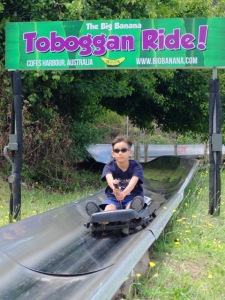 The Big Banana is worth a stop, especially if you’d like to grab a banana treat! The water park looked like a lot of fun as well, but we had to continue on our way, since we still had a number of km to cover.