Staying with our friends in India gave us a great opportunity to branch out and see more of Chennai, using their house as home base. One of the attractions we had heard about and had passed multiple times was an amusement park called Dizzee World. We kind of found the name a bit humorous due to the fact it sounded a lot like Disney World back home and we thought that they probably, purposely called the park Dizzee world because it sounded similar. However, it looked fun and considering it was the middle of a school day, and like, 35 degrees, we figured it might be a good time to go because no one would be there.

The two kinds of tickets you could get were jumbo fun, or mega fun, which wouldn’t be a good name for a ticket if someone didn’t have fun. Mega fun being the better one (yet more pricey). We took two mega fun passes and two jumbo fun passes. Unfortunately, we all were considered adults because we were way over the height limit, kinda like Canada’s wonderland where have to be two feet to be half price.

Since it was like twelve noon and the hottest it was going to get, lunch was the best idea yet. However, if I hadn’t said already, this is India, thus the curries were spicy. We enjoyed the naan bread but still came out of the restaurant (if you could call it that) with our mouths on fire after just one bite of the curry. And the fun was just starting up. We walked around the park to see the rides and other stuff and the park just looked downright sad. Pathetic! Not including the staff, the four of us made up about 80% of the population of the park. All the staff were just sitting in their booths just waiting for us to come to their rides. They must have had walkie talkies cause they just perked right up when their boss alerted them that they had four customers.

Going back to the place we had lunch, we started there and went to the mirror maze. The maze was seriously just a path through a bunch of mirrors but we kept bumping into things. Mostly mirrors. However, they 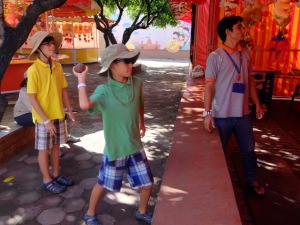 put up just one statue of a zombie and we freaked out cause it appeared on every single side of us which was mildly creepy. Yet, after going through the path of mirrors, we exited into another room which had mirrors on the floor, so it looked like you were going to fall for eternity. Finally, we entered the last room which had a vortex in it. The vortex was a big tube with a path leading through it. The tube spun around and when you walked through the path, you felt like you were going to fall because you felt like you were upside-down, when in reality, you were just walking across the path. We made it out in one piece and then went on to the other things to do in the park.

After a few carnival games, my dad and I went on to the biggest ride in the park, the roller coaster. It was really not that big. However, we have a big story to tell. First when we boarded the roller coaster, we tried to buckle up, which in itself was a difficulty. First, my dad nearly was squished the death by the fastener and it just wou

ld go down far enough to lock into place, so we had to switch seats. My dad’s fastener locked in the right place this time but mine locked a foot out in front of me. I was going to ask for it to be tightened but off we went. Not good at all! Worst of all, the coaster went upside-down! When it did, I came flying out of my seat and had to hold onto my loose fastener for dear life. Besides the safety issues, this roller coaster was sort of like Flight Deck at Canada’s Wonderland.

We went to the water park and many different rides but the one ride that I’ll never forget was pirate ship, otherwise known as The Rage. For those who know what the rage is, this was an exact replica of that. The rage is pushed back and forth by a wheel below it. However, the rage is smooth and the wheel on the rage just goes ‘vvvvoooooommm’. This wheel on the pirate ship went ‘sssqqqqquuuuuueeeeeeekkkkkkk’. And if that wasn’t comforting enough, the pirate ship started to sway the wrong way. Along with going back and forth, it shook side to side. And the worst part was, it was not supposed to!

Despite our shaky experiences we had a great time at Dizzee world but would suggest exercising caution to those who wish to visit.