It was finally my birthday and I couldn’t wait to see the Terracotta Warriors. The bus picked us up and we drove for 2 hours to get to the Terracotta Warriors. We stopped at huge rock saying, “The Emperor’s tomb is that big hill over there”. The guide showed us which hill to look at and told us that it was manmade and you could take some pictures. We got on the bus again and traveled back to the Terracotta area. Caleb and I had to go with the guide to get special entrance tickets and she took us somewhere and told us to sit on a bench and wait. She came back to get us and finally we met up with our parents again.

When we got to the Terracotta Warriors there were 3 pits that you could visit. We started in pit number 2 which showed you 5 warriors that they had pieced together. In pit 3, there were about 36 warriors. They were all commanders and officials. We went to pit 1. It was a huge dome with 2,000 warriors pieced together. It was very interesting, and they say that workers from Germany and some from China come to work on the Terracotta army every night. They think it will take 40 years to finish pit number 2 and 60 years to finish pit number 1. 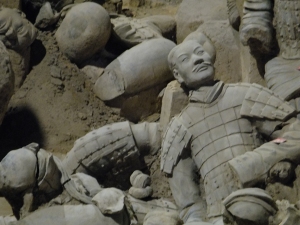 One of my favourite activities is biking, so the next day we went to the Xi’an city wall and rented bikes. You can bike all the way around the city on the wall, which is about 14 km – which I could do! The bikes took a little getting used to because you couldn’t adjust the seats. They were quite tall and Caleb tried to use it but almost hurt himself so he decided to ride on the tandem with Daddy. I tried and managed to get up so mommy and I rode the single bikes.

When we got back we went to a special café near our apartment and had waffles. I ordered a waffle which was about the size of a dinner plate! The food was really good and you got whipped cream and syrup with it. I ate it all! After that we went to our apartment and played cards.

I would love to have my birthday in China again!

8 thoughts on “China (Xi’an): Connor’s Birthday in China – by Connor”